“Nothing Gold Can Stay” 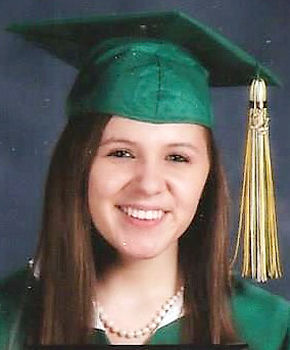 "Nature's first green is gold, Her hardest hue to hold."

"Her early leaf's a flower, But only so an hour."

After moving to Lewisville, Victoria became a Titan then Bronco cheerleader, going to national competition three years, she played basketball, SWFLL softball; she swam for Jonestown and Waterford pools and was a long time member of Holy Family Catholic Church where she was an altar server. Victoria was the volleyball manager for Meadowlark Mustangs, was a Crosby Scholar, and in academically gifted and honors classes throughout her school years. She was appointed to the Lewisville Student Leadership Committee.

She spent two years at Reagan HS where she was a member of the National Society of High School Scholars; she earned Teachers' Choice Award and was in the Art Club. Victoria was so artistically talented that she was on the design team that created the logo for the Milton Rhodes Art Center and helped to paint one of the murals in the center. She attended Young America's Foundation High School Leadership Conference in Washington DC and graduated from West Forsyth HS in 2014. After high school she was a Chief Election Judge and a member of the Forsyth County Republican Women.

"Then leaf subsides to leaf, So Eden Sank to Grief."

After my daughter's violent, traumatic sexual assault on August 7, 2014, her life took a tragic turn. She was diagnosed with PTSD and turned to Heroin to stop the pain. The next three and a half years were a painful time; full of ups and downs panic attacks, nightmares, counseling, overdoses, and spent three days on life support. She acknowledged "the hell and heartbreak" she put me through and had enough forethought, strength and courage to prepare me for her death. She wanted to make sure I was going to be okay because her life was too painful to bear. I told her I wanted her to live forever, but the pain in her eyes tore me apart. I told her I understood and trusted that when God was ready to take her that I would be fine because I would know that she was finally at peace. She thanked me for understanding. She further prepared me by tattooing the words "Nothing Gold Can Stay" on her back knowing I hated ink. I was devastated. However she explained "Mom, it's my favorite poem. It is by Robert Frost and it is a classic." She asked me to read the poem, but I refused.

Last night I read the poem. How fitting were those words. They are now my comfort as her hour has passed and her legacy has just begun.

"So dawn goes down to day, Nothing Gold Can Stay."

What are we going to do about the opioid crisis? How will we save our children?

My name is Susan Stevens. I am Toria Stevens' Mom. Toria died of overdose on January 22, 2018 after suffering PTSD from a violent sexual assault. Toria turned to opiates to numb the pain. I took the pain we suffered and her favorite color and formed the non profit tealdrops.org with a hashtag and a silver lining.

The hashtag stands for every person we have lost to opiates, every person in active addiction and every person in recovery. The silver lining is the money we raise will go to non profits across the country to support approved relapse prevention programs that integrate our strategies for lifelong recovery support and success.